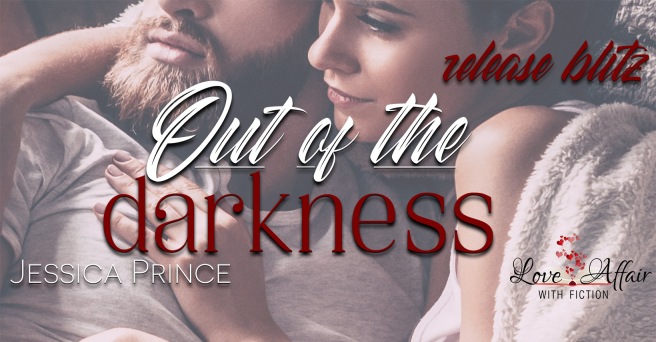 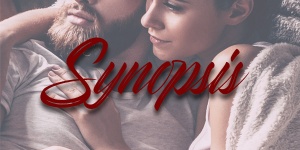 The light had been snuffed out of Xander Caine’s world a long time ago, leaving him to suffer in darkness. After a tremendous loss, he closed himself off from anyone and everyone, content to live alone in the shadows. Then a woman blew into town with the force of a hurricane and shook everything up.

Sage Winthrop was looking to start over. She didn’t have a plan for what her new life would look like, but when she landed in Hope Valley, she knew it was the place she wanted to call home. Then one chance encounter outside of the best coffee shop in town set her world spinning.

Sage and Xander hated each other on sight. However, when they’re forced to work together, that hate eventually turns into something neither of them expected. Their attraction proves too strong to ignore. But when secrets from Sage’s past are revealed and her life is threatened, Xander has no choice but to let go of his demons and step out of the darkness in order to save the woman he loves.

Read for FREE on Kindle Unlimited
Amazon US | Amazon Worldwide 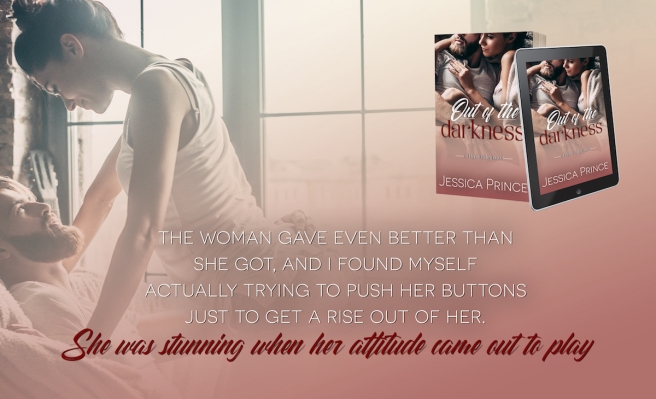 This morning had been . . . different. He was different.

After the second time we had sex, I’d seen a side of Xander I’d never experienced before. Sure, I knew he could be funny. He’d joked with me in the short time we’d been friends, and I totally dug his dry sense of humor, but I’d felt as if I had to pull each one of those out of him.

The Xander that I had this morning was something else. He’d teased in a way he’d never done with me. Hell, he was downright playful. And if it hadn’t been for those shadows I could still see playing in his inky eyes and the way he said discussing his past was out of the question so unflinchingly, I would have thought he was actually happy.

“What’s on your mind, Shortcake?”

At Xander’s question, I pulled myself from my silent contemplation and turned to look at him.

“I miss the bike,” I answered on a pout. It might not have been the honest answer to his question, but it wasn’t a lie.

When we’d left Xander’s earlier, I noticed that the temp outside had taken a serious dive. Instead of leading me to where he’d parked the Harley the night before, he led me to a rustic-looking shed a few yards from the cabin where a big black and chrome truck was parked.

It was nice, relatively new and clean. I’d even go so far as to say the bench seat took my mind into some pretty deep gutters.

But it wasn’t his bike.

“Know you like the bike, baby, and you look sexy as shit in those pants and that jacket, but you’d have frozen to death on the back of it.”

My belly fluttered at his compliment of the outfit I’d painstakingly chosen the night before with him in mind. Good to know it had the intended effect.

He wasn’t wrong about the cold though. As awesome as my faux leather leggings and moto jacket were, they didn’t do a damn thing against the cold.

“Hmm. So what you’re saying is you like me in leather,” I teased.

He glanced at me out of the corner of his eye, and the side of his mouth hooked upward. “I haven’t seen you in much I haven’t liked. But yeah. That leather comes in a close third.”

“After the red dress?”

“After the red dress,” he confirmed.

Curiosity got the best of me, and I couldn’t help but ask, “So what came in at number one?”

He didn’t hesitate. “Those ripped jeans with the fishnets underneath and that cropped black top you wore to The Tap Room a while back.”

“Seriously?” I turned to face him full-on. “That’s nowhere close to the best I’ve got! You’ve seen me in way hotter outfits. Hell, half of what I wear to work is better.” Then something hit me. “Wait—how did you even see me in that?”

“Was walkin’ by the bar, saw you dancin’ through the window,” he answered. “And I didn’t say it was the hottest, babe. Yes, most of what you wear to work has me walkin’ around with a hard-on I can’t get rid of, but that one was still my favorite, ’cause it was you.”

My lips parted and I suddenly found it difficult to breathe as I whispered, “It was me?”

“Yeah,” he replied casually, keeping his eyes on the road, so he couldn’t have seen how big an impact his statement was having on me right then. “From the hair to those boots, it was all you.”

Oh shit. Do not cry, Sage, I mentally scolded. I’d spent three years with a man who did everything in his power to change me. He took who I was and twisted and molded until I became something completely different, and I’d let him.

But with one simple comment, the man beside me not only showed he knew the realme, but that he liked it. He couldn’t possibly know, but having him say that meant absolutely everything. 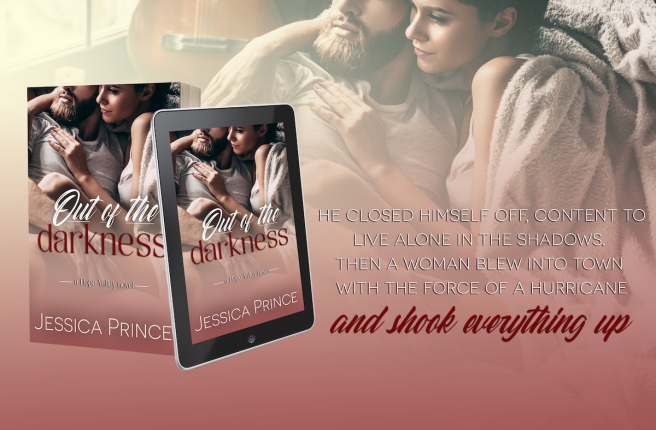 Xander is a quiet and brooding man. He has a dark past he doesn’t talk about. He doesn’t smile and doesn’t socialize with his brothers of Alpha Omega.

Sage moved to Hope Valley for a new start. She is the new receptionist at Alpha Omega.

Their first encounter was instant hate.

But Sage being a fighter, fought for them to become friends. Love Sage’s character so much. She was feisty, strong and as much as I love all the heroes in this series, Sage is my new favorite character.

Xander..love him but also there were times when I didn’t like him much, even though I knew why he was like that and why he did it.

“When she was around, I could almost imagine what it would be like to live in a world that wasn’t full of darkness.”

Love to see Xander slowly getting out of the dark world he’s been living in and get pulled into Sage’s light.

Love it and read it in one sitting. I don’t want this series to ever end. It’s so good. 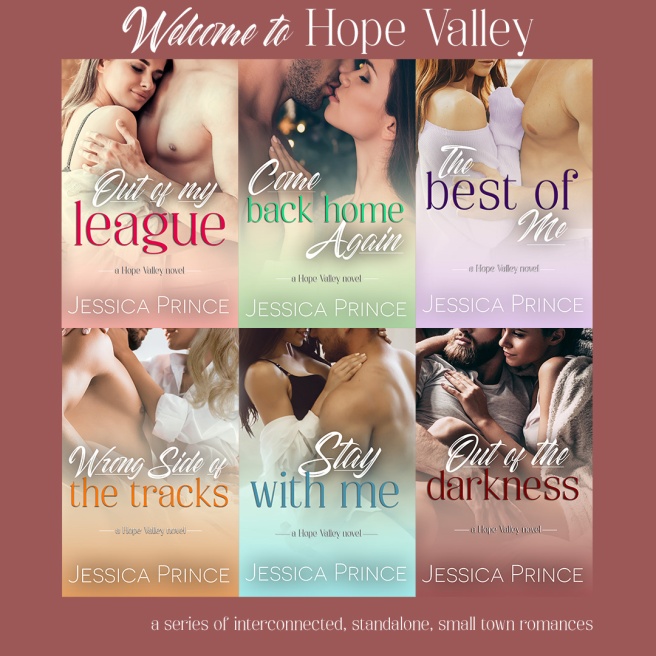 Read for FREE on Kindle Unlimited

Out of My League
Amazon US | Amazon Universal

The Best of Me
Amazon US | Amazon Universal

Wrong Side of the Tracks
Amazon US | Amazon Worldwide

Stay With Me
Amazon US | Amazon Worldwide

Out of the Darkness
Amazon US | Amazon Worldwide

Born and raised around Houston Texas, Jessica spent most of her life complaining about the heat, humidity, and all around pain in the ass weather. It was only as an adult that she quickly realized the cost of living in Houston made up for not being able to breathe when she stepped outside. That’s why God created central air, after all.

Jessica is the mother of a perfect little boy–she refuses to accept that he inherited her attitude and sarcastic nature no matter what her husband says.

In addition to being a wife and mom, she’s also a wino, a coffee addict, and an avid lover of all types of books–romances still being her all time favs. Her husband likes to claim that reading is her obsession but she just says it’s a passion…there’s a difference. Not that she’d expect a boy to understand.

Jessica has been writing since she was a little girl, but thankfully grew out of drawing her own pictures for her stories before ever publishing her first book. Because an artist she is not.